Is it possible to make the mouse cursor bound to the browser window?

I was unable to toggle the mouse/keyboard until I had cleared the hide mouse pointer box in the top left of the browser.

Other than that I had no problems with the playtest today, and the score board loaded properly at the end

I had a lot of fun today. The mouse lock mode was too buggy to be very usable, but great when it worked properly. I was having intermittent problems with the cursor jumping around on screen whenever I would move the mouse.

Past that I think it was a great test

This week was a blast, played with a handful of friends and glad to see they all made impressive marks on the leaderboards. Could we also get some icon or something to denote what team each player was on? Based on the names I don’t recognize, I was playing with Gameangel, Madholont, Hexx, Agamemnus, Dog, and Caribou on the red team.

One_Must_Fall and Mellificient were all over me today, they did a great job of covering eachother. More than once I would find myself chasing one or the other, but not really being able to focus down either due to me having to disengage. Lost the top spot by one kill, but with 20% less deaths I think I did quite well. I’m glad to see my friends ImperialDefenstrator and Gameangel did well, as well as Agamemnus with 43 (jeez!) assists.

Due to improved finger accuracy, we have a completely uninterrupted video, yay!

The only issue I really noticed was that either Thundercat or Stormcrow (don’t remember which) have a fully implemented and operational cloaking device on their ship. About a third of the way through they did a disappearing act at critical health ,the same one noticed a few playtests ago. I’ll review the video and see if I can find it.

Really excited to see what comes next. Do the GMs all play in the same room? Do you guys communicate with each other? How does that work out? 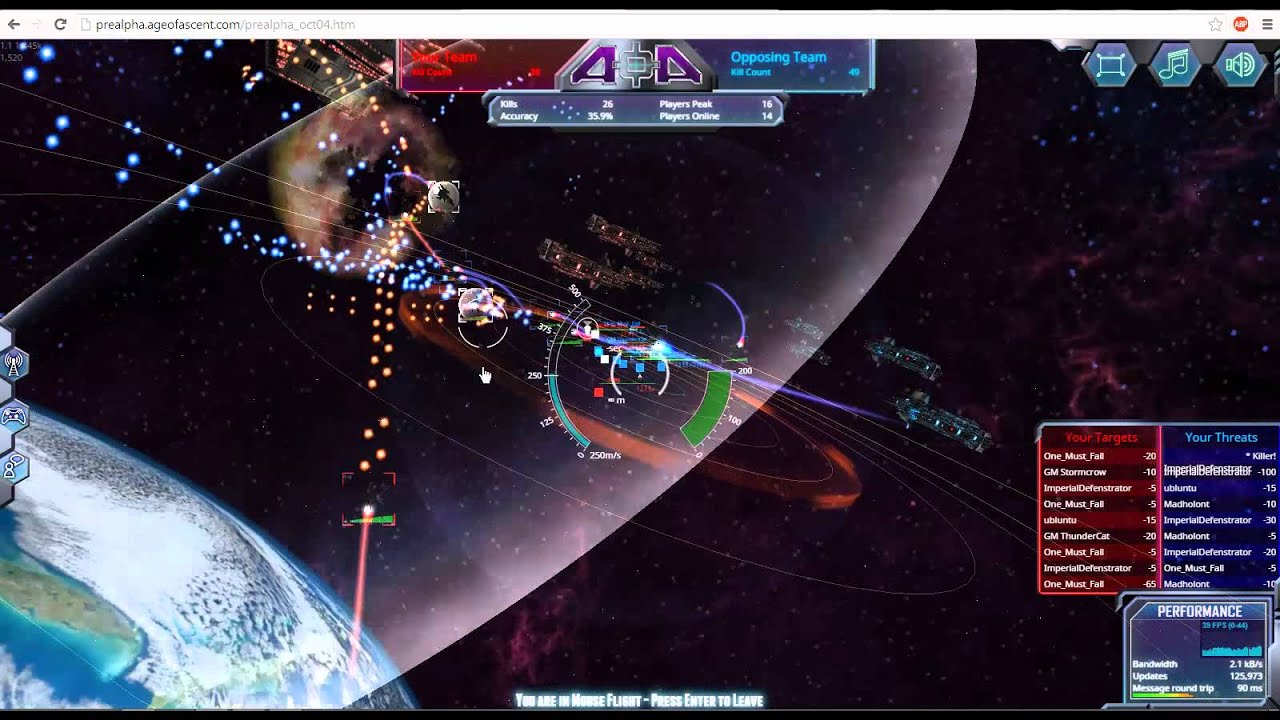 Next recording I’ll not capture the mouse. Unless it’s helpful.

About seven minutes in I begin a dogfight with GM Stormcrow. 20 seconds later, poof, cloak field. A few seconds later after I disengage, he reappears.

I really like the music and how “red” appears whenever you get hit, but the red is seen in “space,” or the area around planets and space objects. My only complaint there is that the red is a bit bright and it irritates my eyes when I get hit continously. Perhaps a darker shade or red?

I also find that I prefer the “click-to-fire” controls over “space-to fire.” But like always my mouse always finds it’s way off screen.

Also on the “Target” and “Threat” lists, I noticed that sometimes names overlapped each other. Often it was the same name, where it was listed once with a number, then again above it saying something else, but the name moved down with the other one so they were both occupying the same space.

Overall though, I am really enjoying how much this game is coming along.

About seven minutes in I begin a dogfight with GM Stormcrow. 20 seconds later, poof, cloak field. A few seconds later after I disengage, he reappears.

Yeah, it’s the same issue as before. Basically I’m testing on a very poor piece of hardware and - especially when I’m under fire - the graphics card locks up for 5-10 seconds, freezing the entire computer. When it recovers appear to blink back into existence!

We have to make it so that a client that has disconnected from the server simply remains flying straight and level at the last known heading; and on/if re-connection occurs then the client is forced to the new server position.

Really excited to see what comes next. Do the GMs all play in the same room? Do you guys communicate with each other? How does that work out?

No, not in the same room - we’re actually spread out over the world, f.ex. GM Thundercat is in the UK, I’m in Florida, GM Rikoo is in Texas. We do have our corp google chat open so we can (usually, when dead!) share some info and make comments on things we’ve noticed.

See you all tmw!