Join us at www.ageofascent.com for a 30 min playtest Saturday, 7th of March, 2015 at 2pm Central US, 3pm East US, 8pm UK/GMT (Desktop browser, mouse and keyboard)

Your Europa reclamation operation is under attack, fight off the invaders before they seize control of your carefully captured asteroids! 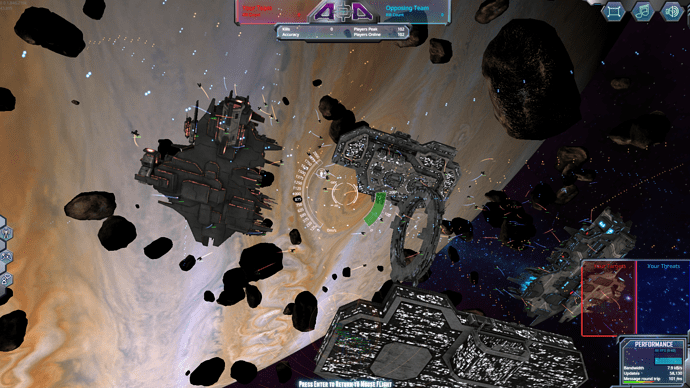 Added asteroids to the mix

Does this mean we get collisions?

Does this mean we get collisions?

Not this time, no; sorry Ubluntu! But soon ™

That’s weird, I got killed by someone named game angel, but he didn’t show up in the scores :/. Happened during the drone spam, couldn’t see his range, and thus, died.

I experienced no lag.

Any possible way for names that are shooting you to appear bigger? Or to look around in a ship?

That was me, and for some reason I almost never appear in the score list.

Not having played this in a while, I can honestly say that the difference in gameplay from back then is largely positive. The increased speed works because it’s harder to hit someone, but not so much that you get no hits. But now you don’t have to stay behind someone for five minutes until you finally kill them.

Evading is easy and effective, but it still takes some skill to shake off your pursuer. And I think the damage/health ratio is well balanced, as you can kill someone fairly fast if you manage to stay on them, and it makes the kill that much more rewarding.

I did experience a bit of lag towards the beginning, but that lasted for a few seconds and I had no similar problems afterwards.

In the end I had fun. It was easy enough to enjoy but required enough skill that it kept me engaged.

Got rid of my lag issues…

Turned off my VPN.

Got no lag issues at all. Still getting the hang of it. What I miss is a targeting / locking system. You start hitting someone and when you both cross each other, you’ll most likelly end up shoting at some other target. Or at least I haven’t had the time to figure it out because… it’s all insanelly fast… it all happens sooooooo darn fast that you just want to get out of the heat and get tacticals again to reengage

Everything looks great! Unfortunately my framerate was in the low teens today, where I don’t remember having less than 30 in previous tests.

That was quite a match! There were several great players on red team (dorkhero, IAMAGEEKYEY, and myself) against what I think was blue team’s numerical advantage. In the end, red finished with twice as many kills.

With the regen nerf, I found that it’s much easier to finish off targets. I found myself sniping quite a few kills at moderate to long range!

I tried very hard to go immortal on this match. It was probably only possible thanks to a crash I had not long before defense force showed up. Again I decided to do hunter mode, and exclusively went for player kills.

I’m still finding it really easy to trip people up by throttling down. I don’t know if this will be less effective once people start paying more attention to speed. There’s really very little reason (while on the offense) to run around at maximum speed. You can stay on a target much better if you’re going slower than them. Strafe can be used to make fine tuned adjustments. If your target boosts, throttling back up will get you back in effective range before they realize they haven’t lost you.

I still think it’s kind of backwards that going as slow as possible is an attack maneuver. The changes to acceleration and deceleration are really nice though.

I didn’t notice any reflections what so ever. But I did notice my framerate was struggling a little more than usual.

Unfortunately, this might be the last match I get to participate in. With the daylight savings time hitting tomorrow and a work schedule change later this month, the matches will start at 1PM when I have to be at work 2PM. Technically half an hour is enough time to get to work, but I likely can’t stay for the whole thing or get videos out effectively.

Video sometime this week or early next week!

I think the throttle feature an d stafing are quite ok. Excelent work.

No problems for me today, pretty constant 30 fps throughout, though i did not notice any reflections. I got snagged twice, though that is my own fault for stopping to look at the scenery, nice asteroids

, will be even better when you cant fly through them.

I noticed the auto-bots ai seems to have improved slightly. They now do try and evade and will hit turbo when pushed.

In response to the control issues raised, on firefox:
Post death it remembered my keyboard preference, I did not have to enter out of mouse lock.
I positively noticed twice when the throttle did not respond to first key press and I had to hit it again, the majority of the time it worked first time.

In response to PsychoRomeos point about throttling back to hunt, I agree and that is generally how I play. 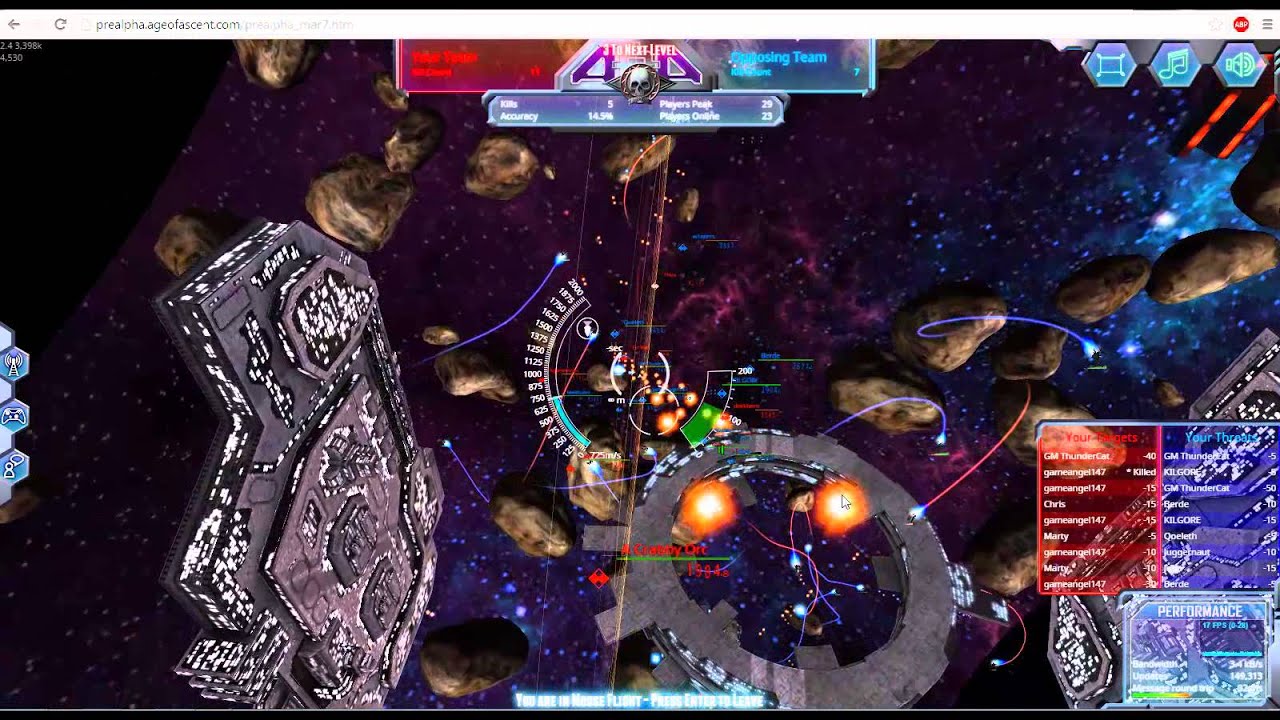 I do enjoy seeing the videos and other player’s attack and evasion strategies.

Not sure if I mentioned this before, but it would be nice to have a feature where we could review a game from either a particular player’s perspective (1st-person or 3rd person) or from a point in space.