Join us at www.ageofascent.com for a 30 min playtest Saturday, 21th of March, 2015 at 3pm Central US, 4pm East US, 8pm UK/GMT (Desktop browser, mouse and keyboard)

Please note time change for US players due to daylight savings changes.

Please note time change for USA (and Canada?) due to daylight saving time

Interesting… I tend to get damaged more by a lot of players then one at a time.

I think it’s worth noting that when me and Romeo fought, well, in the end he gave up after he released what I was saying when I kept moving away. People that are good with movement and 1 vs 1 another person with good movement, take a very, very long time to die.

Speaking of which, I’m playing around with aswd and slow speeds. My gut is telling me I could massively increase in kills if I learn how to use it right.

I disconnected once, but got right back into the fight very quickly.

@IAMAGEEKYEY i got killed twice by you

The only problem was my fault when I accidentally hit the back button on my mouse in the middle of a fight with GM Stormcrow and had to reload.

Don’t worry, I’ll be posting a post about tactics soon.

i think it would be better if the real game adds something other than fighting like
if collecting minerals from astriods , selling them in the main space station for the gov and geting coins , buying weapons , selling it to others , doing missions … ect

I could not secure my kills today. Jeez, seventeen assists. It’s a lot harder to secure kills in a free for all.

This was an awesome match. Regeneration is still insanely powerful in my opinion. I had a five minute dogfight with IAMAGEEKYEY and I just could not stay on him long enough to push through his regeneration. General proficiency in maneuvering makes it near impossible to kill someone with these rapid fire low yield weapons. I eventually just gave up. It was so intense that I gripped my mouse too tight and my hand was fatigued for the rest of the match, which probably made my aim look really sloppy. Looks like he performed insanely well.

Did not crash this time. A true immortal match!

I killed two unnamed ships on my gravidar that ended up being bots.

The turn rate thing is a real problem in my opinion. It’s a really really really good tactic to drop your speed to almost zero and gun someone down like a turret (much like the days when weapons were hitscan), using strafe to avoid getting in their line of sight. It’s not like you can just turn and shoot someone who’s stationary when they have their guns trained on you, and can turn at the same speed. Unless someone else starts shooting you, you basically have a knife to your adversary’s throat.

Speaking of which, I’m playing around with aswd and slow speeds. My gut is telling me I could massively increase in kills if I learn how to use it right.

I definitely noticed your strafing maneuvers. It’s the first time I really could observe someone using them to such great effect. By watching your thruster tail I could estimate your heading, and could adjust my course to stay out of your crosshairs. When I took fire anyway unexpectedly, I realized that you weren’t flying in the same direction you were facing, meaning you were strafing to the outside as you turned, giving you firing opportunities. I’d say you have WSAD down quite well. When I get the video up, I’ll make a notation of the moment where I realized this kill might not be as simple as the others.

i think it would be better if the real game adds something other than fighting like if collecting minerals from astriods , selling them in the main space station for the gov and geting coins , buying weapons , selling it to others , doing missions … ect

Very much the plan, see here for more details - at the moment we’re testing the (critically important) fighting element.

I’m glad everyone seemed to find that test particularly fun. I did too; especially since my K/D and assist ratios were my best yet, and I completely agree with PR regarding the intensity of the fight.

Whilst playing “turret” (which is what I did quite a lot of this time round) currently has benefits, being stationary will ultimately become ‘deathsville’ for non-tank ships once missiles are ingame; I think we’ll know more about the effects of speed when further elements (other ship types with characteristics, different weapons etc) make it into the playtests.

We’ll turn regen down a bit next test; I think it’s provided a useful baseline for ‘hard to kill a skilled pilot’ as a combination of RoF, hitbox size, damage, maneuvrability, shield capacity and regen.

I’d say you have WSAD down quite well. When I get the video up, I’ll make a notation of the moment where I realized this kill might not be as simple as the others.

Thanks for participating in this test, everyone - much appreciated, as ever!

Tentatively posting this. I plan to re-upload it after adding in a few more annotations. I wanted to get this up as quick as possible. The crescendo of my duel with @IAMAGEEKYEY occurs at approximately six minutes in I think. I’ll review later this week. 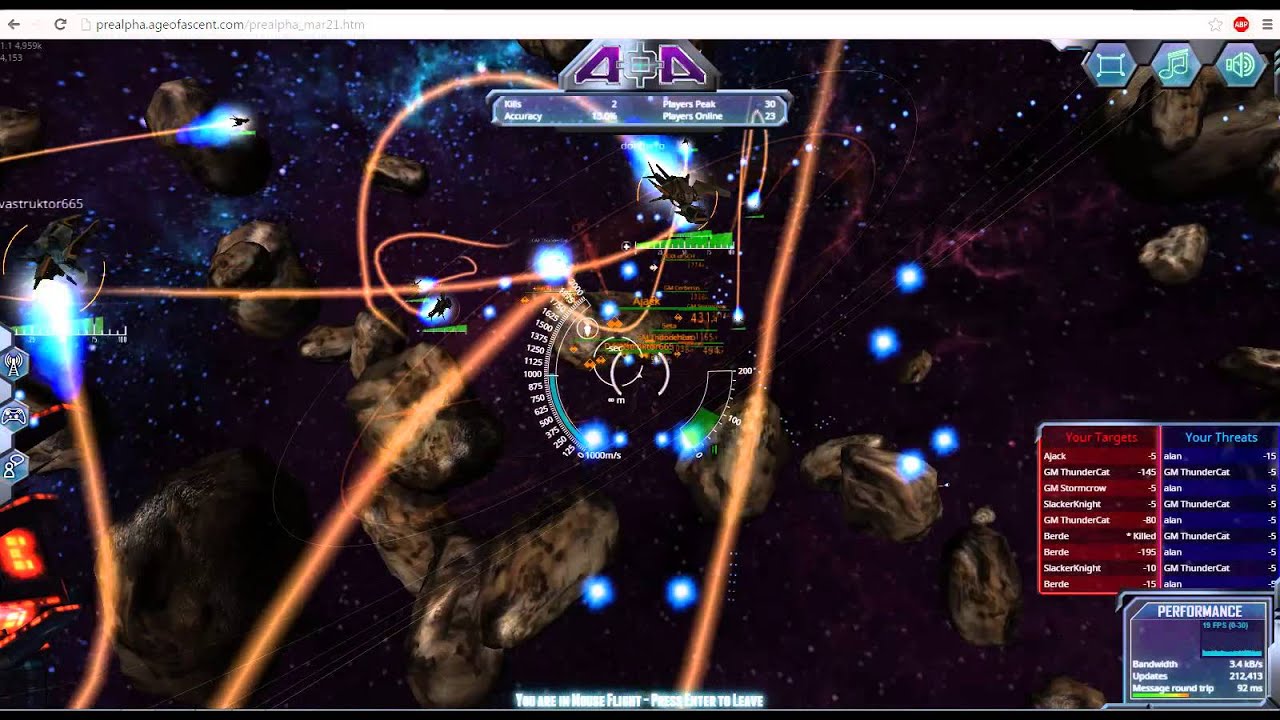 Really excited for missiles! I would love to dance with not only other players, but locked on missiles.

I notice sometimes the names on the gravidar map get a little bright at times. I think it would be awesome if they were dimmed, and pressing the alt button would make them brighter.