Welcome to the second Age of Ascent team combat playtest!

It’s on Steam, and you’ll need to download it here!

Many things have changed since our last PvP playtests, including a new front end with even more great artwork and improved visuals. We have streamlined the UI while in space and expanded the hangar so you have a choice of three ships, this time – each with different loadouts.

Review the ship options, choose one and then watch the match count-down clock for the start of the next match. Jump into space and you will join one of the two teams for the 20-minute team combat match (unless you destroy the other team’s barge first!).

Your teammates’ ships are blue and the enemies are red. You can see all the ships on the radar and use the contact list to lock on a target.

We have different scoreboards, one for during the match to see how the teams are doing, one at the end of the match to show your victory or defeat and a player KD ranking when you are in the hangar. You can see these by holding down TAB.

For this playtest, you will be given an unlimited number of ships, with no penalty for deaths, so get out there and go for it!

After each match, you will be randomly placed on one of the two teams for the next match.
There is in-game chat if you have any questions and our GM’s will be in the Age of Ascent Discord channel, as well. We welcome all suggestions and feedback so please go into the Age of Ascent forum thread and add your thoughts.

The playtest will run for an hour – or longer if people want to keep playing!

Look forward to seeing you there.

Hi, When I tried to join the last play test via Steam I received : An error occurred while updating Age of Ascent Playtest (invalid platform). No matter what I did I was not able to join. Using a Macbook pro. Would love to have a go this Saturday.

Many apologies for this. Our current playtest .exe file is Windows only atm; we will have a Mac-compatible version, hopefully for the next playtest.

It would be great to have some sensitivity controls

Oh boy, I really wish I had made the last test to get some practice in!

One of the first things I really noticed was weapon accuracy. What a huge deal that is! It severely nerfs the backpedaling evasive strategy that some of the veteran players have adopted since it very much relies on doing hard maneuvers and compensating with good aim. I couldn’t tell if I was throwing shots with my lateral input, or if lateral input simply imposed an accuracy penalty, or both. Either way, it was pretty freaking satisfying to both maneuver evasively and exchange with someone, and steady your aim and line up a kill shot.

This decision making process is compounded by temperature management, which I thought was very restrictive at first but it didn’t take long to learn how to work with it. I guess I was really used to the very spammy projectiles of earlier versions of the game.

I was very impressed with the dichotomy between the heavy ship and the interceptor as well. My initial thoughts were things like “well if heat is a factor then damage potential per temperature is the best move”. But that started evolving as I got more used to the ebb and flow of the new combat systems. I would say it’s more “damage potential per opportunity” and, while initially I liked the big freaking gun of the heavy ship, I started getting more out of the interceptor’s ability to just dump 75% of its temperature into target in three seconds. The faster projectiles makes it much more resilient to inaccuracy as well, something I didn’t expect to be as important as it is in the [relatively] low range of combat engagements this game has. And the interceptor has a much more elusive geometric profile, unlike the big guy who’s the broad side of a barn no matter what angle you approach it from.

And another thing, collision is also something that caught me off guard. I think early on I was exchanging fire with TC when he hit the boost button and just blasted right through me. I dunno if collision damage is a thing but it felt like it. It will definitely change the way I play.

Time to kill felt good. A lot of space games favor alpha strike too much, and it makes it hard to come back when someone gets the jump on you. It also lends itself to joust style combat which I just don’t find very engaging personally. The heat mechanic (specifically the way it has a timer before it starts regenerating I think) makes you take a second to gauge whether or not this is a fight you have the resources to continue, or if you gotta break off for a bit.

Some issues:
The game does not like my ultrawide monitor. The ship selection UI wouldn’t work until I toggled the fullscreen mode off and on, which put black bars on the side. Additionally, I think there was some incorrect adjustment of the UI position (see in the clipping of the text in the upper right) that I think might have happened because I hide my start menu.

I found third person mode to be really cool but basically unusuable in combat. The crosshairs’ convergence seemed to be out at infinity and I didn’t see any adjustments made based on the range of my target. This is greatly improved in first person mode but on the big heavy ship especially, I still had to physically turn the entire ship left and right to get each of its shots to go where I wanted them to. Those guns are very far apart.

There needs to be a deadzone for mouse flight. I wasn’t able to tap space, click a target, and hit space again without being sent way off course. Additionally, tabbing out seemed to send the mouse off into a corner, making your ship do circles until you tabbed back in.

There was a problem I encountered maybe 8~10 times where you’d get stuck in a state where lateral movement would be so powerful it’d send you flying out of the play area. I noticed that using boost seemed to resolve this, for the duration of the boost. It might have been related to colliding with something at the conclusion of a boost? I couldn’t tell for sure.

Sometimes I’d f4 to quit out of the game (due to the above) and when I relaunched, the ship type I had previously chosen would be missing from the hangar. I had to pick a different one. They’d return on next death.

Getting hit and hitting others didn’t have enough feedback I think. I miss the screen shake, it made things dire and it made people panic press the boost button.

The gigantic target reticules were very obstructive in my opinion. Comparison to elite dangerous: 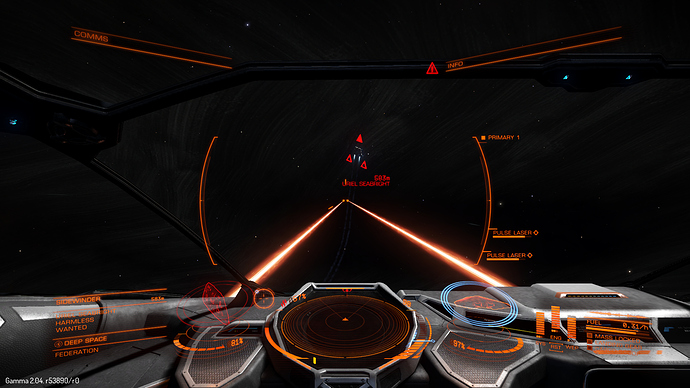 I am very much looking forward to the next test!

Howdy! Just wondering whether the Oct 16 playtest will be mac compatible?