Excellent test today! No crashes or bugs that I noticed and love the new weapon.

Those drones, just free kills waiting to be taken…

Thankfully, running away seems to be balanced for even players like me. If I run away, and someone of alright skill chases me, I will die. I know because I tried.

Going to have to get used to these weapons, and then try player sniping, just as if I was in a bigger fighter. Probably a important balance issue. Then I can get to hitting my target more often. Weakening a target and finishing them off at short range seems to work fine for me. It’s important that snipers are valid at short range as well, or they will be left into uselessness like in eve online.

Can you be more specific about what you mean about the model graphics having issues? Would be very useful to know.

Interesting, thanks for letting us know. To clarify: it was the texture colour on the surface of the model that had a monochrome fit when viewed at distance?

Really unhappy i had to miss this one :’(
anyone got recordings?

It’s actually 320 rounds per second (quad x80 rounds each per second, but with a single burst being 16 rounds for each of the 4 cannons in a 200ms trigger cycle). The cannons also rotate just a small bit when activated, so it behaves a bit like laying down a paired cylinder flak barrage.

We think it’s a pretty fun weapon, it certainly feels quite ‘meaty’ to fire.

Really unhappy i had to miss this one 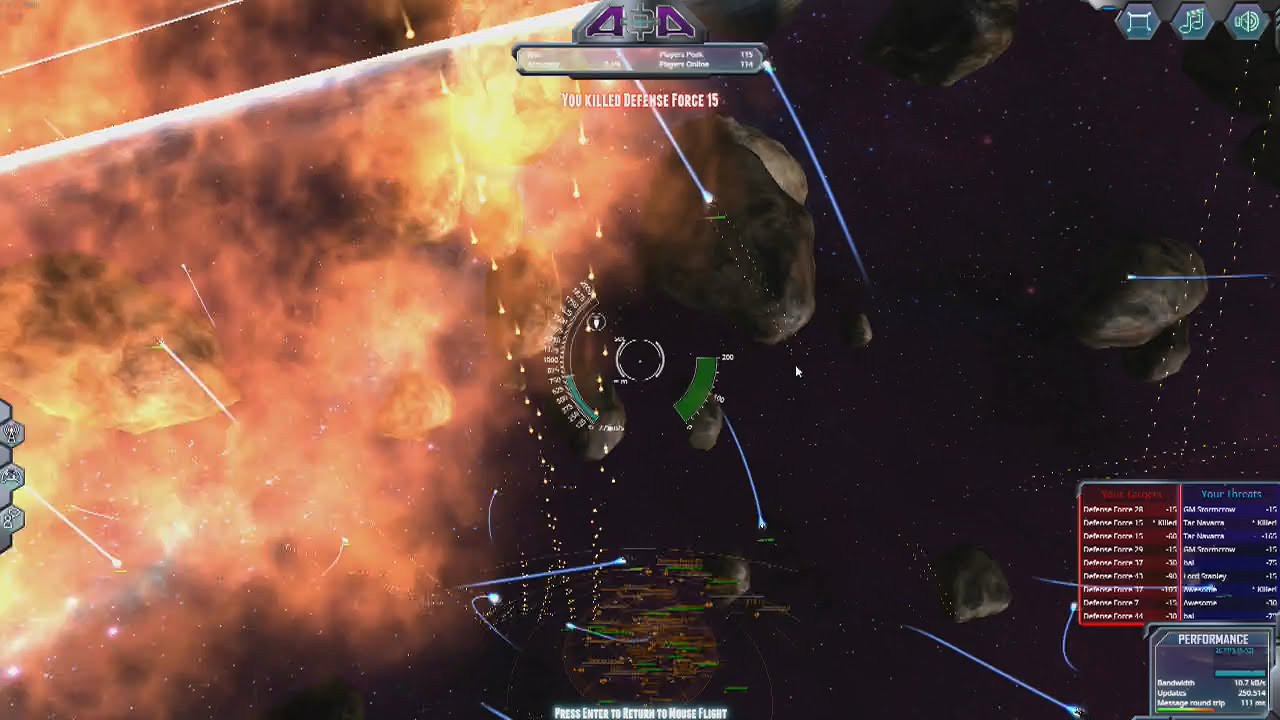 I shaved 15 minutes out; but is still a pretty bad performance…

Alas no strafe was using a remote mouse and keyboard on a different computer via Mouse Without Borders; but I couldn’t mouse lock

Know my lesson for next time…

-_- I thought I already discussed this with you.

I’ll tell you what, when the game is released, because you can’t seem to play in the playtest, in our starter ships, we will fight. I want you not to press q or e the entire match, and we’ll see who wins. Spawn at the system closest to the end of the alphabet. And we probably should shut up about this because this is too off topic.

What I’m thrilled about, personally, is the fundamental clarity that raw piloting skill actually, genuinely, no-holds-barred, for sure, actually means something very significant in AoA.

These tests prove there’s no two-ways about it.

What we need to implement next (in terms of the combat skill arbiter) is a step outwards from the tactical to the strategic; where combat at an individual level is complemented by larger scale fleet decisions about fleet placement, engagement and target prioritisation: from the individual to the squad, to the wing, to the fleet. Comms and discipline, inexorably intertwined with raw piloting skill, will be the key to AoA alliance sovereignty.

Whilst I would say this… I do think it’s shaping up to be, y’know, a bit ****ing awesome

One request for the next playtest (or any previously recorded playtests by any of you with a recording, if you’re willing to go back over it)…

We’re beginning to work on the tactical NPC AI. This is the decision-making that NPCs have (which is currently entirely ‘dumb’).

I would love for one (or more) of you talented pilots to narrate their PoV combat on a video, focusing on the “whys” of decision-making.

I’m really, really interested in the “why” of our top pilots’ split-second (as well as medium-term) decision-making process.

It can only help the (reasonably sophisticated) individual/tactical decision-making AI we’re building if we get some sense of your thought processes. We’re starting at the individual level; then we’ll build up to a squad/group level and then to the strategic level. I’ll share more about the in-progress AI work in The Lounge in the next week or two.

Hoping for volunteers - either from current/next VT or from previously-recorded VT!

Using different methods, I have possibly found a good video recorder. YouTube people hungry for subscribers never cease to amaze me in their research methods. Anyone tried EzVid?

I can’t make the playtests because I get off work half an hour after they end on Saturdays.

But unless something changed (and it doesn’t look like they have), rolling does nothing but change the orientation of your screen. You can see further in the corners of your screen than you can in the top or bottom. You could always have a circular shaped window though, I guess. Pitch and yaw are equal in AoA so rolling really does nothing as far as flight is concerned.

By rolling you can get a curve on a strafe maneuver, but you could do that with an joystick input instead of WSAD too. It’s not like an engine limitation or something.

The next time I manage to get into a playtest I can stream and record it. My new computer can handle it a lot better than the one I used to make the other recordings. If I don’t hate my voice too much that day, I’ll narrate my exact decision making process while doing so.