Sorry about the slow start! Some settings were lost in the bowls of the beast and caused a mighty panic

Wow, at first I thought it was going to be another heavily stacked blue team, but red really picked up mid game. Blue finished strong in the end though.

I had an incredibly difficult time subduing both Awesome and Lyken at the same time. I often got attacked by one or the other while dealing with someone else. Being outnumbered really hurts your odds in a fight since the shield regeneration was implemented. Focusing down a target is really tough while trying to be evasive.

More than once I found myself in a really unpleasant 4v1 kind of situation. Holy hot hell. I think I noticed that instead of one big soup, there were two. A predominantly red soup, and a predominantly blue soup. I tried to stay tangental to both, but I often found myself picking up too much attention at a time. Had some sweepingly destructive dogfights out on the fringes of the ring though.

It was great seeing practical chrome again. Good job Awesome, Lyken, and JRamsey for making netting the blue team over 20 kills each. Unfortunately I stand alone with that title for the red team.

So, what kind of metrics were taken this round? What can we expect to see in the future come from this data? I noticed a quite a lot of bots were released this round.

The only thing that I have to add is that when the bots are released, the map on the biggest setting obscures most of the screen. Many of the names of the pilots when grouped together make it very difficult to see. My suggestion would be to limit the range of the map or make the names lighter to improve visibility.

You can change the sensor range yourself with the < and > keys.

The health regeneration changes the way I tackle fights. Before I would often just shoot one enemy then move onto another when following them wasn’t easy, chipping away at their health in a sort of “every little bit helps” mentality. Now I need to focus on an enemy and stick to him, which makes the gameplay more persistent in my opinion.

I also have trouble with the map getting in the way, especially when the bots swarm, but I just minimize it, since all it does is confuse me anyways.

Overall I am having lots of fun with this game. The turbo is a great way to run away and the music is still just awesome. 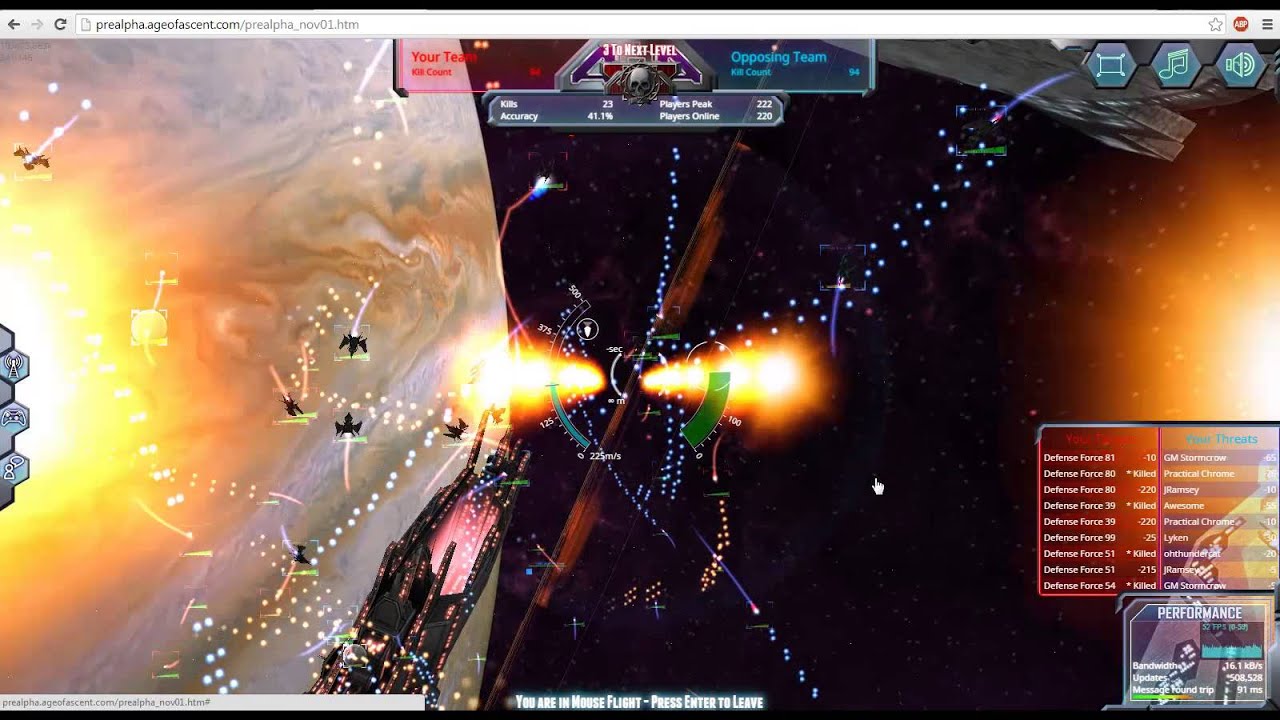 A few ideas for the minimap / radar / sensor.

2b) Another thing (maybe for the future) that would be cool would be to add to the lock-on calculation not just damage but distance away from your ship, modified by how far away they are from your ship’s nose… that way you could maybe automatically “lock on” to a ship you are tracking but haven’t actually shot yet.

This week please note possible time change! The playtests are on universal time, and your daylight savings may have changed.