After almost a month, I am so ready to get back in.

So, what do we think of the dynamic music returning? I enjoy it a lot!

Holy hot hell that has got to have been one of the most exciting and trying video game experiences I’ve had in years. I definitely noticed that things felt a lot more fluid and polished. I find it fun and exhilarating.

I was rocking out to the music. However, after a point the fade back to normal stopped working I think. I’ll verify in the video when I can get it uploaded tomorrow. While I think there is great ambient space music and great intense dogfight music, I don’t feel like the transition between the two is appropriate. Is there a more tame version of the intense dogfight music that can act as a buffer between the ambient space music and the intense dogfight music? Maybe a version of the same song that is rocking out a little less awesomely? I’ve played a game before that instead of just changing the music, just faded in a few extra rock out beat heavy layers to their normal combat music when things got intense. Granted, 75% of my play experience is intense.

I saw ubuntu sporting a very effective boosted corkscrew evasive maneuver. GM Thundercat would randomly show up on my tail when I least expected it, and GM Stormcrow got accuracy accolades. Jeez what a match. Every played that arcade shooter where you step on the foot pedal to duck behind cover? When that game gets intense, you accidentally start ducking as you slam on the pedal. That was my entire half hour. My shoulder and right arm are screaming from making mouse maneuvers, my left hand’s fingertips are sore from trying to squeeze out those extra few degrees when turning, and I’ve got to work out a kink in my neck from ducking enemy fire.

The cosmic soup that comes back up now and again will get really interesting when ship to ship collision becomes a thing.

And unfortunately Defense Force N ships are being piloted by turkeys.

Jeez, cannot wait for the next play test. Videos up by tomorrow. I once again fat fingered F10 and cut the video a few minutes in while trying to make the game fullscreen.

Would it be helpful to enable some kind of visual button feedback on screen so that people watching the video could see exactly what buttons the player is pressing while they’re flying?

I really enjoyed this weeks test, the graphics felt smoother and the dynamic music combined with hit sounds made for great non-visual feedback.

I really can’t say how great that makes the team feel - a heck of a lot of new work went into the changes to the network, interest management, physics, event, gfx and processing engines - and I’m glad it so clearly felt smoother all round!

I’ll reply in more detail to your comments in the next couple of days - just wanted to say “many, many thanks”. Looking forward to the vid, PR.

Glad you enjoyed it! Hope it was worth the wait 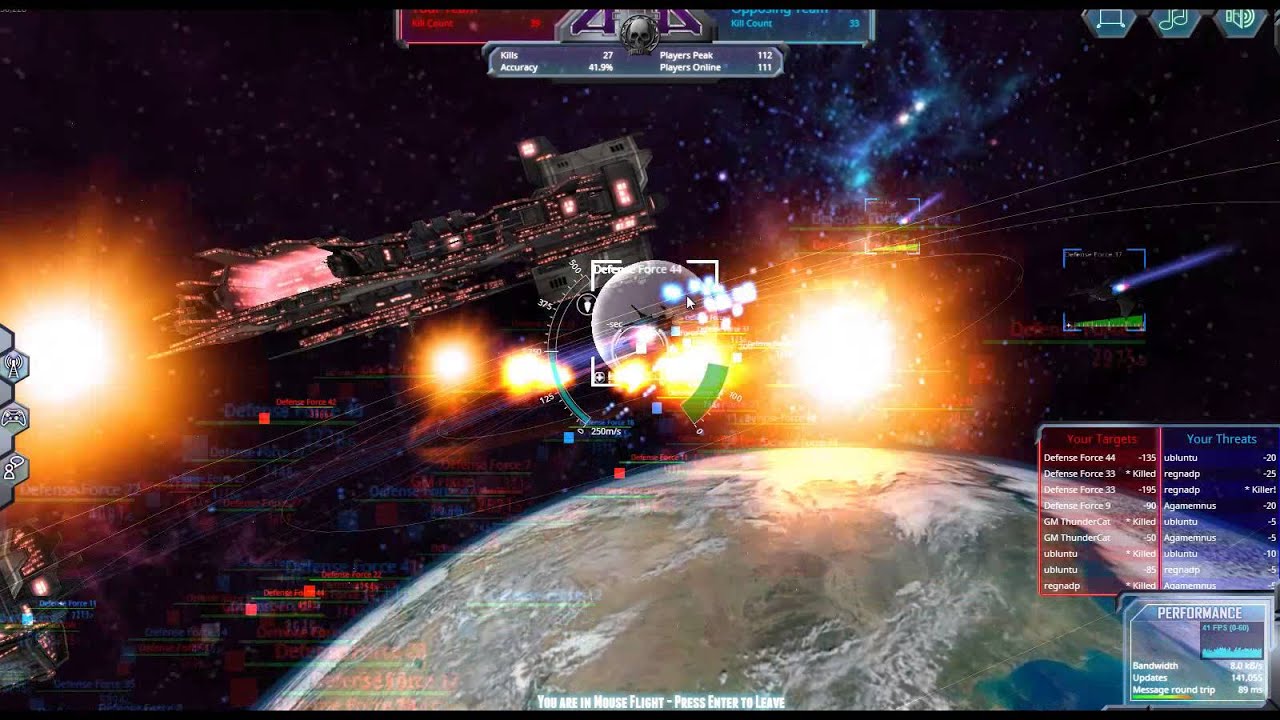 I would like to bring special attention to the number of times I pull a split-S reversement (or some variation of this) maneuver to eat up distance while going into or coming out of a boost (among other situations). I’d like to or upload a picture, but I don’t have permissions for that.
Hold hold a roll and strafe key to get a nice barrel roll going while mousing any direction until you’ve done a 180. Really messes with your enemy’s depth perception. It also gives me time to think and identify my target.

It’s sometimes hard to control my speed with the mousewheel. I find that more often than I want to change to a certain speed, I want to either decelerate or accelerate. I guess I should practice trying to measure my intended change in speed, rather than just throw the slider to extremes.

Thank you @PsychoRomeo for this video, very informative and good to see a different perspective on the battle. The more regular players seem to switch into evasion quicker and use much more complex evasive patterns.

That is a particularly stunning corkscrew sequence by @ubluntu!

As @GM_stormcrow says we did spend quite some time trying iron out bugs and make sure the extensive back end changes were a solid foundation to build on, so it really was quite satisfying to see it all come together this week